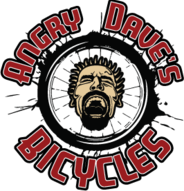 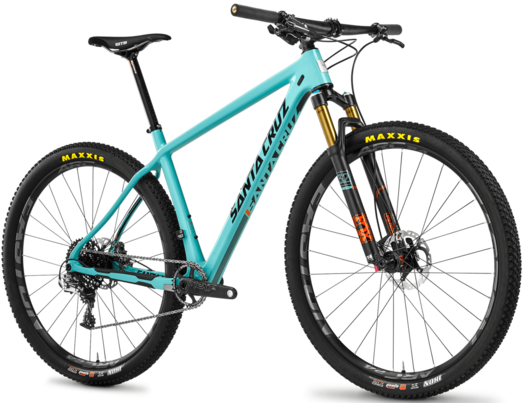 Santa Cruz Bicycles was founded in 1993 in a space the size of a single car garage in the Seabright Cannery, in Santa Cruz California. Our first bike, the Tazmon, was a single pivot dual suspension bike that rattled established sensibilities and helped define our then- ethos of "simply advanced." That bike was the cornerstone for a brand that was founded on the notion of doing things our own way in order to build the best. We have been rattling sensibilities ever since.
We now manufacture 16 models of mountain bike which includes a full women's Juliana range.  Made from either carbon fiber or aluminum, we cover everything from hardtails to 8.5" travel downhill machines.  We offer two suspension technologies; efficient single-pivot designs on certain aluminium bikes, and our advanced VPP (Virtual Pivot Point) technology on all high end models. VPP bikes are available with a wide range of component and suspension options to choose from, each hand-assembled to order in our California factory. Every one of our bikes is the distillation of our desire to ride and build the highest performance mountain bikes in the world. No more, no less.
We could get all touchy feely here and talk about how we are committed and impassioned riders, and how we love bikes so much that it somehow elevates us into something unique, but that's kind of common fodder for these "about" tabs on bike company websites. EVERYONE working in this industry should be committed and impassioned. It takes that kind of commitment to try and build the perfect bike. Still, we think we chase that vision harder, smarter and sometimes a bit weirder than the others. 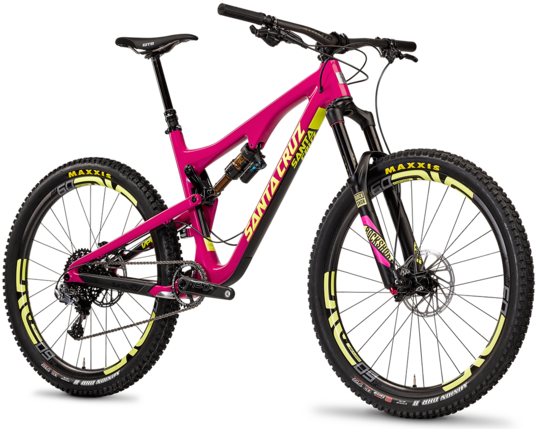 Standing tall, the world over.
The Tallboy was our first 29er, and reflected the way we wanted 29ers to ride – fast and fun. For our second iteration, we doubled down on this idea, and made what amounts to a screamer of an XC bike that still feels right at home on real trails. Features like the ISCG 05 tabs, the 142mm thru-axle in the rear, and routing for dropper posts may not have been the first things on the list for most full-suspension cross-country bikes, but we felt they were all must-haves, and you'll find them all on the Tallboy. Out back, there’s 100mm of VPP-controlled travel, and we've tuned the shock rate to provide an efficient but smooth ride. When paired with a 120mm fork, it offers traction and control in spades.
This CC-level frame makes use of our lightest and strongest carbon fiber. In real terms, this means we can use less material to provide the same strength and stiffness, all while reducing the frame weight by about 280 grams.

It is also Angry Dave's personal choice for his off road riding!

HIGHBALL 29"/27.5"
The Highball is now available in 29” and 27.5”.  You pick. We tried to keep the handling characteristics the same between the two bikes, and let the wheel size’s traits shine through. One difference –the 27.5” version has a size small, while the 29er does not, and that the 29er has an XXL, while the 27.5” does not. On the 29er, we shortened the chainstays by almost a half-inch, and stretched out the front end of the bike by about the same. This allows you to run a more modern stem/bar combo and makes the bike a little quicker in the corners. A lot of folks want to talk about head tube angle when they talk about hardtails, but we rode a lot of different options, and decided the 70.5-degree angle we used on the first Highball was spot-on. It strikes the right balance of quick handling and stability, and won’t wander on you when you’re climbing.
Despite our commitment to carbon fiber engineering and manufacturing, we know the allure of a metal bike. Perfect welds, proper heft, and a certain tangible quality makes metal an attractive materail. It's also more amenable to the placement of bolts and other hardware than carbon is, which is why we offer a single-speed dropout kit in the alloy version of the Highball, but not the carbon. If you want to get your hammerhead on, we think this is the best way to do it. In addition, we reduced the seat post size to 27.2mm, which adds some compliance you’ll appreciate when you’re 80 miles in to a 100-mile race.
The Highball is unapologetically fast, surprisingly fun, and every bit a Santa Cruz mountain bike.

Hightower has the versatility to deal with whatever appears on the horizon.  Running either proven 29" wheels or the new monster-truck 27.5”+ standard, Hightower seamlessly adapts to the trails and style you ride, no matter where you are in the world.

29
If straight line speed, rallying through rock gardens and sprinting out of turns is your bag, then 29” wheels are the big ticket. Upgrade to carbon rims and you have a precision instrument on your hands.

27.5+
​When conditions get loose and the traction just ain’t there, you’ll want to reach for bigger tires. 27.5+ elevates Hightower to a whole different level, enabling you to rise above the pow, rail the soft spots and carry momentum where standard tires bog down.

No matter what size you run, geometry remains optimized thanks to a neat little “High/Low” setting on the upper link that flips to adjust bottom bracket height*.  Hightower’s 67° head angle, longer reach and trim chain stays combine to create an altogether different class of dreadnought in any configuration.  Meanwhile, 150mm of seat dropper, a water bottle mount, and internal routing reflect an armada of killer details.

135mm of VPP® travel is reinforced by a 148 rear axle spacing and the kind of Nomad-syle linkage arrangement and swingarm design we reserve for the heaviest hitters in our model line up.  The resulting package leaves Hightower standing head and shoulders above anything else out there.

This CC-level carbon frame is every bit as stiff and strong as our C-level frame, but weighs about 230 grams less, due to the use of some lighter, stronger, and more expensive carbon fiber. Using this material in key places allowed us to use less material overall, which is what shaves off half a pound from the frame. 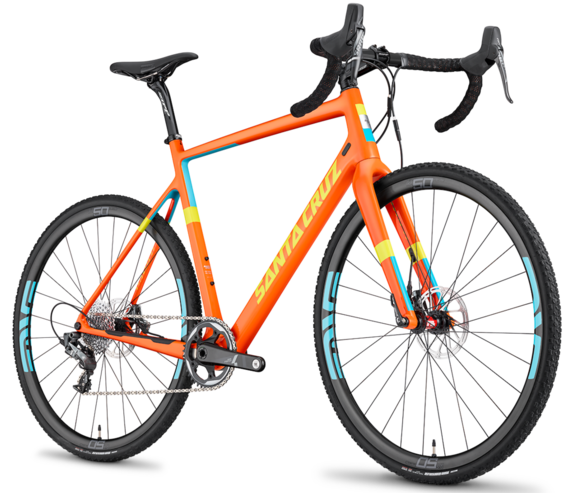 BRONSON
When we introduced Bronson, it took the market by storm, redefining what people expected from a 150mm trail bike. Equally at home in the Trans-Provence as it was on The Ridge, updating and improving it was going to be no small feat.
The most visible upgrade is the completely new VPP® link arrangement.  The lower link tucks neatly above the bottom bracket, fully-recessed and protected from impacts.  Meanwhile the box-section upper link now mounts cleanly to the top-tube and enhances lateral stiffness as a result. Shock rate’s been refined in the process too, delivering greater small bump sensitivity and a more progressive mid-stroke.
Geometry has also evolved subtly to meet demand from riders for a bike of this ilk.  The seat tube angle’s been steepened, placing the rider right above the cranks and perfectly in position to lay down the power. Meanwhile a one-degree slacker 66 degree head tube angle combines with a 20-25mm longer top tube and shorter chainstay length to create an evermore rally-ready geometry than its predecessor.
This CC-level carbon frame is every bit as stiff and strong as our C-level frame, but weighs about 280 grams less, due to the use of some lighter, stronger, and more expensive carbon fiber. Using this material in key places allowed us to use less material overall, which is what shaves off more than half a pound from the frame.

STIGMATA
The Stigmata is a cyclocross bike deserving of the Santa Cruz name.
We do things a bit backwards here at Santa Cruz. While most companies first introduced carbon fiber on their road bikes, we made mountain bikes from it to prove its strength and versatility as a material. Then we made a downhill bike. And now we’ve made a carbon Stigmata—a 'cross, gravel, just go ride bike.
We developed the new Stigmata simply because we missed the old Stigmata!  We felt there was a lot we could do with carbon that we were unable to do with the original aluminum model. At the same time, hydraulic disc brakes for road bikes were becoming a reality, meaning that we wouldn’t have to put up with ancient braking technology to get our drop bar on. The new Stigmata is versatile. It’ll fit 41mm-wide tires with room for mud, but handles nicely with skinny road tires for base miles. It’s also home to our first PressFit 30 bottom bracket. We didn’t make this decision lightly, but not only is PF30 capable of accommodating all road bike cranks, it allowed us to make the bike lighter while maintaining the strength and durability you expect from Santa Cruz.
This CC-level carbon frame is every bit as stiff and strong as our C-level frame, but weighs about 280 grams less, due to the use of some lighter, stronger, and more expensive carbon fiber. Using this material in key places allowed us to use less material overall, which is what shaves off more than half a pound from the frame.

SUPERLIGHT
The Superlight, along with the Heckler, is one of the longest-tenured models in the Santa Cruz lineup. It’s fast, light, unapologetically simple, and a blast to ride. When it came time to redesign the Superlight, we wanted to make a bike that fit each rider’s size and weight as well as possible. The result is that the small and medium sizes utilize higher shock leverage ratios to ensure lighter riders make effective use of the travel.  We also used 27.5" wheels in the small and medium sizes to improve handling and create industry-leading standover height for shorter riders.
Meanwhile, the large and extra-large sizes come with 29" wheels so that taller riders benefit from the rolling advantages of that wheel size. All sizes sport 100mm of single-pivot suspension in an aluminum package that's durable, easy to maintain and perfect for years of hassle-free mountain biking.

5010 is built to serve the most technical backcountry missions.
130mm of VPP® (Virtual Pivot Point) travel produces a shorter chainstay length and lower BB height compared to the 5010’s bigger-travel brethren. This creates a uniquely playful character and an insatiable appetite for negotiating steep, rocky climbs.
And when it’s time to head home, playtime becomes a riot. The new 5010 has a 67-degree head tube angle, more aggressive than before, and the longer top tube welcomes the use of shorter stems for more precise handling and greater confidence on rapid descents. 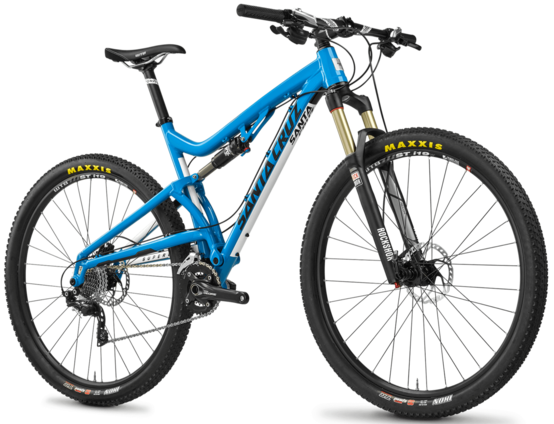 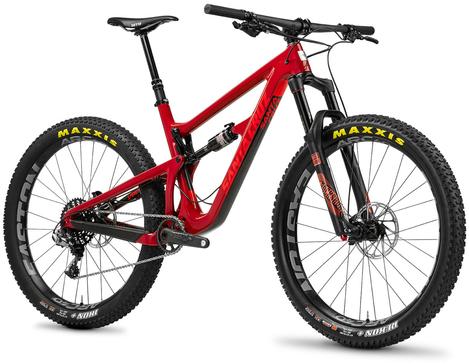 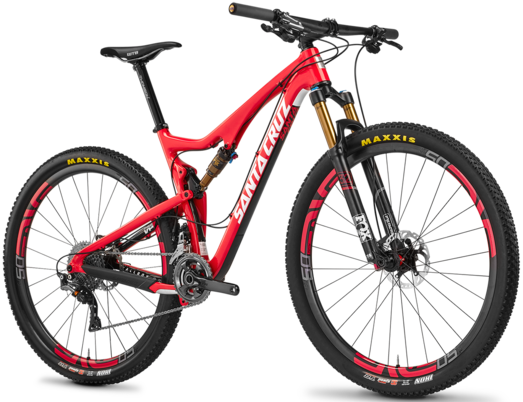 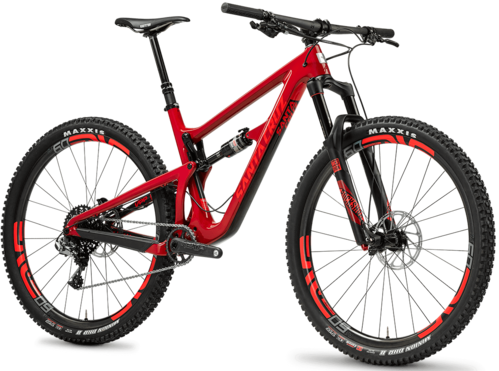 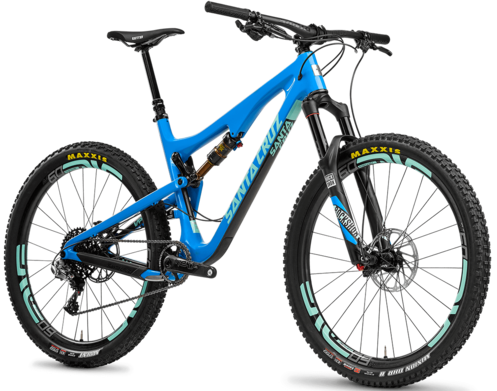